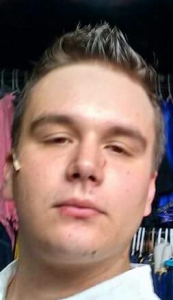 What sort of person is going to love this character?
I think that “Amnesia” will appeal to everyone, because even though not everyone has amnesia, everyone forgets this at times

How is this character like you? Different?
“Amnesia” is like me in a way when she always tries to help but kind of messes up in the process too. I think she’s different by being well a girl.

Besides yourself, what celebrity would you like to see tackle this character?
If another celebrity man was playing my role. I think Eric Stonestreet (Cameron Tucker from “Modern Family”) would be a great “Amnesia” because his over the top acting would be perfect for a character like her.

If someone was going to make your life into a movie, who would play you?
If my life were a movie I would have Bradley Cooper play me and Kelsey Grammar would be narrating it.

When did you first perform?
I began acting when I was 12 years old in a Christmas with Scrooge at Musical Theater Village.

When you have a five-minute break during rehearsal, what do you spend that time doing?
During my 5 minute breaks I’m usually playing a game on my phone (Angry Birds, Trivia Crack, or any of my videogame emulators)