We open this Friday night, July 24 at 6:30 p.m! Come early to watch the set build by the actors! Definitely part of the entertainment.

We also have planned a weekend FULL of fun!

Saturday, July 25: Downton Abbey night! Come dressed to impress… Or as a servant! The 1920s is an era of wonderful outfits, and those who lived and worked in Downton Abbey were full proof of that.

Sunday, July 26: Fairy night! MIDSUMMER is a magical show, made especially so by the fairies who flit through the show causing mischief for the mortals. Bring your wings, wands, glitter- whatever lets you create a fantastical sprite!

SHOW INFORMATION:
On the Edge Theatre Productions in cooperation with the Laguna Hills Community Center presents SHAKESPEARE IN THE HILLS 2015. This year we will be running two shows over a period of 3 weeks. Both shows are directed by Aurora J. Culver

Shakespeare’s A MIDSUMMER NIGHT’S DREAM will play July 24, 25, 26, 31 and August 7. On opposite nights, Reduced Shakespeare’s THE COMPLETE WORKS OF WILLIAM SHAKESPEARE ABRIDGED – a comedy where 3 actors perform all of Shakespeare’s plays in just 90 minutes! This show will run on August 1, 2, and 8.

The shows will start at 6:30 p.m. The shows will be held on the lawn near the gazebo at the community center, 25555 Alicia Pkwy, Laguna Hills, CA 92653. Bring a beach chair, blanket, and a picnic dinner. Tickets are just $10 for adults. Kids 12 and under are free.

On the day of each show, we are accepting cash only at the door (no checks, or debit/credit cards).

Why did you want to be involved in this production?
I think I just really was intrigued by the show and working with awesome fun people. Theater is cool like that, you form a community and then you’re kind of hooked. Like a second family, that you don’t get to blame genetics for. It’s all your own fault.

Call someone out by name: who must come see this production?
Well since I apparently have some sort of curse that gives the people I call out an extremely bad case of the stomach flu, I shall call NO ONE out. That way – everyone comes!! And no one gets the stomach flu… which is nice too, I guess.

Who’s the least?
I suppose Alex is least like his character. Because he remembers his name (most of the time) AND he is not female.

What do you want to be when you grow up?
I’d like to be a unicorn-dragon. That wish still stands from the last round of interview questions.

If someone was going to make your life into a movie, who would play you?
Angela Kinsey, who is the lady that plays Angela in The Office. She is short and blonde and funny. Which is all you need to be in life.

Besides this one, what’s your favorite stage show?
I saw Red when I was in Copenhagen, and I absolutely loved it. Granted it wasn’t in English. But that’s ok because I speak Danish. You probably wouldn’t have liked it as much though…

Who do you look up to (as an actor/director/etc.)?
The answer to this will always be Emma Thompson. I love her in everything – Sense & Sensibility when she cries from complete happiness that the love of her life is not married – Stranger Than Fiction when she spits in napkins and puts her cigarettes out that way – The fact that she wrote an original and moral children’s movie… and all her amazing work with Kenneth Branaugh. She’s so cool.

What’s your perfect Sunday afternoon look like?
Well first off I’m gonna need some sort of time extender. Because I’ll want to cram a lot of stuff into the “perfect” afternoon. First, I re-read the entire Harry Potter Series, then I look up and “BAM” I’m the only person in The Wizarding World of Harry Potter. Which now also happens to be located in Ireland. Because that’s a much cooler place than Orlando. Frikkin Orlando… Anyways, then Rupert Grint shows up in his ice cream truck (look it up, he owns one) and we just ride around the park pretending to be wizards. He’s totally in on it and not weirded out, by the way. After that, I steal his ice cream truck (Ha Rupert! Bet you didn’t see that one coming) and I trek on over to Stonehenge. Where I have a magical time with a bunch of free ice cream … well, technically stolen ice cream. After that, a simple hop and a skip over the pond and I’m in Denmark having afternoon coffee and pastries with the whole cast of Nunsense – because let’s not deprive them of Danish pastries, that would be cruel.

When you have a five-minute break during rehearsal, what do you spend that time doing?
I don’t have breaks, because I am a super human that never stops working. Or Reddit. One of those two.

Who’s the funniest person in the cast in real life?
I think the entire cast is funny – they have to be for this show. But also Eric, our sound tech, but that’s just because he thinks cake pops are made from cake batter. HAHhahah! They aren’t, we googled it. It was a big thing.

What do you do when you’re not doing theatre?
I read and work and cook and try to write and be creative. I also pet my cats a lot. They take up more of my time than they should. I lead a pretty boring life actually.

If you had a magic wand, what show would you do next?
I don’t know which show I would put on with a magic wand… and honestly ( and I will probably be stoned to my death for saying this with Theater friends all around) I don’t think the first thing that would pop into my head would be which show to do. If I had a magic wand there would be other things happening first. Cheezits would no longer exist. They are disgusting and don’t deserve a place in this world.  Maybe after their eradication I would put on The Lion King or Wicked. Heck I’ve got a magic wand- I’d put on both! 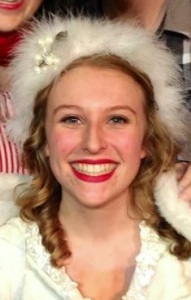 Why did you want to be involved in this production?
I actually know nothing about the show, but I love working with Dawn and the cast can’t be beat. They are so funny in real life so I know they will be amazing on stage together. Besides, rehearsals are a good ab workout from laughing.

Call someone out by name: who must come see this production?
Rhona Kershnar and the MTV JCS Cast!

Who in the show is most like their character?
Parker Griffin – Being a dancer helps him bring the character to life on stage. He channels his inner diva dancer at all the right times.

Who’s the least?
Rebecca Rubino – She is nothing like her character in real life but on stage you would never know. She is soft-spoken and has a gentle spirit that you won’t see as Sister Robert Anne

What do you want to be when you grow up?
Still working on that…but, I live and breathe theater so something in that realm.

If someone was going to make your life into a movie, who would play you?
Amy Adams

Besides this one, what’s your favorite stage show?
I don’t have one favorite, but some of my top choices are Shrek, Thoroughly Modern Mille, and Singing in the Rain.

What’s your perfect Sunday afternoon look like?
Sleeping in then going to see a show and afterwards hanging out with my theater family.

When you have a five-minute break during rehearsal, what do you spend that time doing?
Drink water and go pee, but not at the same time, of course.

Who’s the funniest person in the cast in real life?
Roger – he is good at playing off of what everyone else is saying. He is the silent one that sneaks ups on you and then you never stop laughing. Alex – he has the best one liners…combined, you get the best ab workout. “FOOLS!!!”

What do you do when you’re not doing theatre?
I am always doing theater! Occasionally, I sleep and eat…and when necessary homework.

If you had a magic wand, what show would you do next?
Thoroughly Modern Mille or Anything Goes